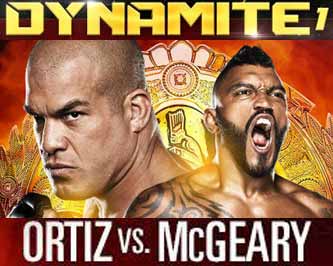 Review by AllTheBestFights.com: 2015-09-19, good finish between Liam McGeary and Tito Ortiz: it gets three stars.

The undefeated Liam McGeary entered this fight with a perfect mma record of 10-0-0 (90% finishing rate) and he is ranked as the No.10 light heavyweight in the world (currently the #1 in this division is Jon Jones). He has fought once in 2015 winning the Bellator light-Hw title against Emanuel Newton (=Newton vs McGeary).
His opponent, the former Ufc light-Hw champion Tito Ortiz, has an official record of 18-11-1 (67% finishing rate) and he entered as the No.12 in the same weight class. He suffered three consecutive losses between 2011 and 2012 but he came back to win last year defeating Alexander Shlemenko (=Shlemenko vs Ortiz) and Stephan Bonnar (=Ortiz vs Bonnar). Ortiz vs McGeary, main event of “Bellator 142 – Dynamite 1”, is valid for the Bellator light heavyweight title (McGeary’s first defense). Watch the video and rate this fight!