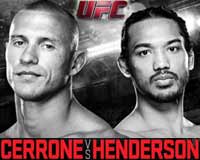 Review by AllTheBestFights.com: 2015-01-18, close fight but not so exciting: the third bout between Donald Cerrone and Benson Henderson gets two stars.

Donald Cerrone, who replace an injured Eddie Alvarez, entered this fight with a pro mma record of 25-6-0 (73% finishing rate) and he is ranked as the No.3 lightweight in the world (currently the #1 in this division is Anthony Pettis); he suffered his last defeat in 2013 when he faced Rafael dos Anjos (=Cerrone vs dos Anjos), since then he has won six consecutive bouts, the last one against Myles Jury (just two weeks ago!! Cerrone vs Jury).
His opponent, the black belt in tae kwon do and Bjj and former Ufc Lw champion Benson Henderson, has a record of 21-4-0 (52% finishing rate) and he entered as the No.4 in the same weight class, he fought three times in 2014 beating Josh Thomson (=Henderson vs Thomson) and Rustam Khabilov (=Henderson vs Khabilov) but then he lost to Rafael dos Anjos (=Henderson vs dos Anjos). In their first and second fight Henderson defeated Cerrone by unanimous decision in 2009 and via submission in 2010; this third fight is on the undercard of Conor McGregor vs Dennis Siver – UFC Fight Night 59. Watch the video and rate this fight!