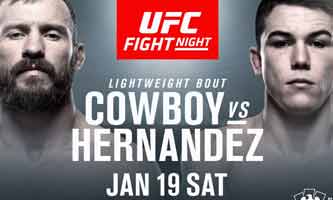 Review by AllTheBestFights.com: 2019-01-19, good fight between Donald Cerrone and Alexander Hernandez: it gets three stars (UFC Fight of the Night, UFC Performance of the Night).

The black belt in Brazilian jiu-jitsu and gaidojutsu Donald Cerrone entered this fight with a professional mma record of 34-11-0 (76% finishing rate) and he is ranked as the No.14 welterweight in the world. He fought three times last year beating Yancy Medeiros (Donald Cerrone vs Yancy Medeiros) and Mike Perry (Donald Cerrone vs Mike Perry) but between these two bouts ‘Cowboy’ lost to Leon Edwards (Donald Cerrone vs Leon Edwards).
His opponent, Alexander Hernandez, has an official record of 10-1-0 (60% finishing rate) and he entered as the No.15 lightweight. He suffered his only loss when he faced Jamall Emmers in 2013, since then he has won eight consecutive bouts beating Beneil Dariush and Olivier Aubin-Mercier in 2018 (Olivier Aubin-Mercier vs Alexander Hernandez). Cerrone vs Hernandez is on the undercard of Henry Cejudo vs TJ Dillashaw – UFC Fight Night 143 (also known as UFC on ESPN+ 1). Watch the video and rate this fight!