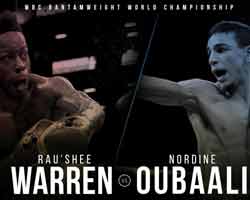 Review by AllTheBestFights.com: 2019-01-19, technical fight but not so exciting: Rau’shee Warren vs Nordine Oubaali gets two stars.

The three-time Olympian and former Wba Bw champion Rau’shee Warren entered this fight with a boxing record of 16-2-0 (4 knockouts) and he is ranked as the No.10 bantamweight in the world (currently the #1 in this division is Luis Nery). He lost to Zhanat Zhakiyanov in 2017 (via split decision, Rau’shee Warren vs Zhanat Zhakiyanov) but then he has beat McJoe Arroyo and Juan Gabriel Medina.
His opponent, the undefeated Olympian Nordine Oubaali, has a perfect record of 14-0-0 (11 KOs=79%) and he entered as the No.9 in the same weight class. In his last three bouts he has won over Alejandro Hernandez (Oubaali vs Hernandez), Mark Anthony Geraldo (Nordine Oubaali vs Mark Anthony Geraldo) and Luis Melendez (Nordine Oubaali vs Luis Melendez).Warren vs Oubaali is valid for the vacant WBC World bantamweight title (curiously the French-Moroccan already faced Warren at the 2008 Summer Olympics in Beijing beating the American by just one point); undercard of Manny Pacquiao vs Adrien Broner. Watch the video and rate this fight!