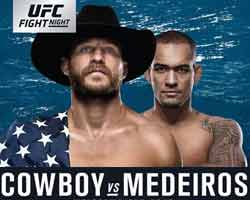 Review by AllTheBestFights.com: 2018-02-18, good exchanges between Donald Cerrone and Yancy Medeiros: it gets three stars.

The black belt in Brazilian jiu-jitsu and gaidojutsu Donald Cerrone entered this fight with a professional record of 32-10-0 (75% finishing rate) and he is ranked as the No.16 welterweight in the world but ‘Cowboy’ comes off three consecutive losses, against Jorge Masvidal (Cerrone vs Masvidal), Robbie Lawler (Lawler vs Cerrone) and Darren Till (Donald Cerrone vs Darren Till).
His opponent, Yancy Medeiros, has an official mma record of 15-4-0 (80% finishing rate) and he entered as the No.14 in the same weight class. He lost to Francisco Trinaldo in 2016 but then he has won three fights defeating Sean Spencer, Erick Silva (Silva vs Medeiros) and Alex Oliveira (Alex Oliveira vs Yancy Medeiros). Cerrone vs Medeiros is the main event of the UFC Fight Night 126. Watch the video and rate this fight!

(Free embeddable video hosted on Youtube and not uploaded by AllTheBestFights)
https://www.youtube.com/watch?v=noeo8jVR-Cc