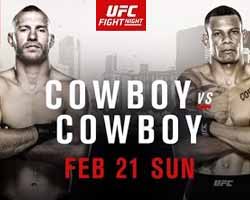 Review by AllTheBestFights.com: 2016-02-21, good work on the ground and nice finish: Donald Cerrone vs Alex Oliveira gets three stars (UFC Performance of the Night).

Donald Cerrone entered this fight with a professional mma record of 28-7-0 (71% finishing rate) and he is ranked as the No.2 lightweight in the world. He fought four times last year losing just his last bout, against #1 Rafael dos Anjos (=dos Anjos vs Cerrone 2).
His opponent, Alex Oliveira, has an official record of 13-3-1 (85% finishing rate) and he entered as the No.58 in the same weight class. He also suffered one loss in 2015, against Gilbert Burns (=Burns vs Oliveira) but then ‘Cowboy’ Oliveira has won three consecutive fights beating Piotr Hallmann (=Hallmann vs Oliveira). Cerrone vs Oliveira is the main event of the UFC Fight Night 83. Watch the video and rate this fight!