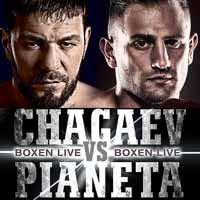 Review by AllTheBestFights.com: 2015-07-11, disappointing fight between Ruslan Chagaev and Francesco Pianeta: it gets two stars.

Ruslan Chagaev entered this fight with a professional boxing record of 33-2-1 (20 knockouts) but he is not ranked as he hasn’t fought since July 6, 2014 when he defeated Fres Oquendo in a fight valid for the vacant Wba Hw title (=Chagaev vs Oquendo). He suffered his last loss in 2011 when he faced Alexander Povetkin (=Povetkin vs Chagaev).
His opponent, Francesco Pianeta, has an official record of 31-1-1 (17 knockouts) and he entered as the No.45 heavyweight in the world. His only loss occurred in 2013 when he faced Wladimir Klitschko (=Klitschko vs Pianeta); since then he has won three bouts beating Ivica Bacurin in his last one. Chagaev vs Pianeta is valid for the WBA World heavyweight title. Watch the video and rate this fight!