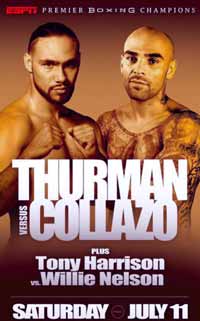 Review by AllTheBestFights.com: 2015-07-11, pretty good fight between Willie Nelson and Tony Harrison: it gets three stars.

Willie Nelson entered this fight with a pro boxing record of 23-2-1 (13 knockouts) and he is ranked as the No.19 super welterweight in the world but he comes off the loss against Vanes Martirosyan (=Martirosyan vs Nelson).
His opponent, the undefeated Tony Harrison, has a record of 21-0-0 (18 KOs=86%) and he entered as the No.27 middleweight. He has already fought twice in 2015 beating Antwone Smith (=Harrison vs Smith) and Pablo Munguia (=Harrison vs Munguia). Nelson vs Harrison is on the undercard of Keith Thurman vs Luis Collazo. Watch the video and rate this fight!