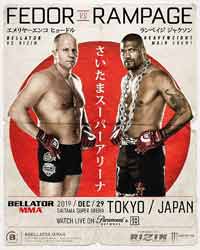 Review by AllTheBestFights.com: 2019-12-29, pretty good finish between Michael Chandler and Sidney Outlaw but it is not enough to get three stars: it gets two.

The former Bellator Lw champion Michael Chandler entered this fight with a pro mma record of 19-5-0 (74% finishing rate) and he is ranked as the No.16 lightweight in the world but he comes off the loss against Patricio Freire (Michael Chandler vs Patricio Freire); before this fight, in 2018, he had won three bouts defeating Brent Primus in his last one (Brent Primus vs Michael Chandler II).
His opponent, Sidney Outlaw (who replaces Benson Henderson), has an official record of 14-3-0 (57% finishing rate) and he entered as the No.66 in the same weight class. He lost two consecutive bouts between 2015 and 2016, against Elijah Harshbarger and Gregor Gillespie, but then he has won nine fights defeating Cesar Balmaceda and Roger Huerta in 2019. Chandler vs Outlaw is on the undercard of Fedor Emelianenko vs Quinton Rampage Jackson – Bellator 237 (Bellator & Rizin: Japan). Watch the video and rate this fight!