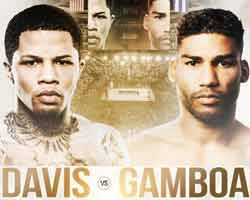 Review by AllTheBestFights.com: 2019-12-28, good fight between Gervonta Davis and Yuriorkis Gamboa: it gets three stars.

The undefeated former Ibf and current Wba super-Fw champion Gervonta Davis entered this fight with a perfect boxing record of 22-0-0 (21 KOs=95%) and he is ranked as the No.5 super featherweight in the world. In his last three bouts he has won over Jesus Marcelo Andres Cuellar (Gervonta Davis vs Jesus Cuellar), Hugo Ruiz (Gervonta Davis vs Hugo Ruiz) and Ricardo Nunez (Gervonta Davis vs Ricardo Nunez).
His opponent, the 2004 Olympic flyweight gold medalist, former IBF and Wba Fw champ Yuriorkis Gamboa, has a record of 30-2-0 (18 knockouts) and he entered as the No.10 lightweight (currently the #1 in this division is Vasyl Lomachenko). He lost to Robinson Castellanos in May 2017 (Gamboa vs Castellanos) but then he has won four bouts defeating Miguel Beltran Jr (Yuriorkis Gamboa vs Miguel Beltran Jr) and Roman Martinez in his last two (Yuriorkis Gamboa vs Roman Martinez). Davis vs Gamboa is valid for the vacant WBA World lightweight title. Watch the video and rate this fight!