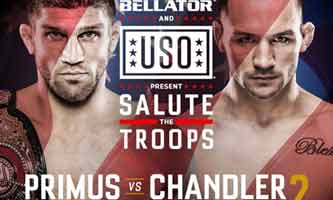 Review by AllTheBestFights.com: 2018-12-14, good fight between Brent Primus and Michael Chandler 2: it gets three stars.

The undefeated black belt in Brazilian jiu-jitsu and Bellator Lw champion Brent Primus entered this fight with a perfect mma record of 8-0-0 (75% finishing rate) but he is not ranked as he hasn’t fought since June 24, 2017 when he defeated Chandler in their first bout (Michael Chandler vs Brent Primus I); before this fight, in 2016, he had beat Gleristone Santos.
His opponent, the former Bellator Lw champ Michael Chandler, has an official record of 18-4-0 (78% finishing rate) and he entered as the No.14 lightweight in the world. After losing to Primus he has won over Goiti Yamauchi (Michael Chandler vs Goiti Yamauchi) and Brandon Girtz (Michael Chandler vs Brandon Girtz). Primus vs Chandler 2, main event of Bellator 212, is valid for the Bellator lightweight title (Primus’ first defense). Watch the video and rate this fight!