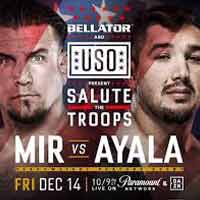 Review by AllTheBestFights.com: 2018-12-14, pretty good fight between Frank Mir and Javy Ayala: it gets three stars.

The black belt in karate, Brazilian jiu-jitsu and former Ufc Hw champion Frank Mir entered this fight with a pro mma record of 18-12-0 (78% finishing rate) and he is ranked as the No.51 heavyweight in the world but he comes off three consecutive defeats: against Andrei Arlovski in 2015 (Arlovski vs Mir), Mark Hunt in 2016 (Mark Hunt vs Frank Mir) and Fedor Emelianenko in 2018 (Fedor Emelianenko vs Frank Mir).
His opponent, Javy Ayala, has a record of 10-7-0 (90% finishing rate) and he entered as the No.47 in the same weight class but hehas also lost his last two bouts, with Roy Nelson (Roy Nelson vs Javy Ayala) and Cheick Kongo (Cheick Kongo vs Javy Ayala); before this bout, in 2016, he had beat Sergei Kharitonov (Kharitonov vs Ayala). Mir vs Ayala is on the undercard of Brent Primus vs Michael Chandler 2 – Bellator 212. Watch the video and rate this fight!