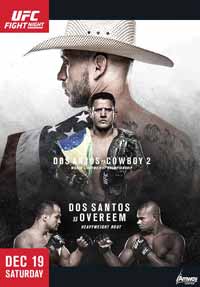 Review by AllTheBestFights.com: 2015-12-19, pretty good fight between Charles Oliveira and Myles Jury: it gets three stars.

Charles ‘do Bronx’ Oliveira entered this fight with a professional record of 20-5-0 (90% finishing rate) and he is ranked as the No.10 featherweight in the world (currently the #1 in this division is Conor McGregor) while his opponent, Myles Jury, has a mma record of 15-1-0 (80% finishing rate) and he entered as the No.14 lightweight. Both fighters have lost their last bout: Oliveira was defeated by Max Holloway (=Holloway vs Oliveira) while Jury lost to Donald Cerrone (=Cerrone vs Jury). Oliveira vs Jury is on the undercard of Rafael dos Anjos vs Donald Cerrone 2 – UFC on Fox 17 (Olivieira weighed in mire than 5 pounds over the limit of 145 lbs, so he was fined 20 percent of his purse). Watch the video and rate this fight!