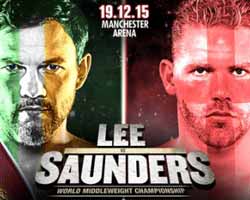 Review by AllTheBestFights.com: 2015-12-19, some good exchanges in the first part of the bout but the rest of the fight was not so entertaining: Andy Lee vs Billy Joe Saunders it gets two stars.

Andy Lee entered this fight with a pro boxing record of 34-2-1 (24 knockouts) and he is ranked as the No.4 middleweight in the world (currently the #1 in this division is Saul ‘Canelo’ Alvarez). He suffered his last loss in 2012 when he faced Julio Cesar Chavez Jr (=Chavez Jr vs Lee), since then he has collected six victories (winning the vacant Wbo title against Matt Korobov, Korobov vs Lee) but then he drew with Peter Quillin in his last bout (=Lee vs Quillin).
His opponent, the undefeated Billy Joe Saunders, has a perfect record of 22-0-0 (12 knockouts) and he entered as the No.16 in the same weight class. He won over Chris Eubank Jr (=Saunders vs Eubank Jr) and Yoann Bloyer in his last two fights (=Saunders vs Bloyer). Lee vs Saunders is valid for the WBO World middleweight title (Lee’s first defense). Watch the video and rate this fight!