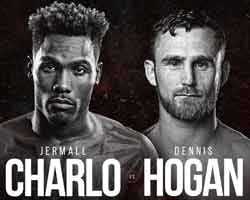 Review by AllTheBestFights.com: 2019-12-07, pretty good fight between Jermall Charlo and Dennis Hogan: it gets three stars.

The undefeated world champion in two different weight classes Jermall Charlo entered this fight with a perfect boxing record of 29-0-0 (21 knockouts) and he is ranked as the No.3 middleweight in the world (currently the #1 in this division is Gennady Golovkin). In his last three fights he has won over Hugo Centeno Jr (Jermall Charlo vs Hugo Centeno Jr), Matt Korobov (Jermall Charlo vs Matt Korobov) and Brandon Adams (Jermall Charlo vs Brandon Adams).
His opponent, Dennis Hogan, has an official record of 28-2-1 (7 knockouts) and he entered as the No.17 super welterweight but he comes off the loss against Jaime Munguia (via majority decision, Jaime Munguia vs Dennis Hogan); before this bout, in 2018, he had beat ‘Jimmy’ Kilrain Kelly in April (Dennis Hogan vs Jimmy Kilrain Kelly) and Jamie Weetch in December. Charlo vs Hogan is valid for the WBC World middleweight title (Charlo’s third defense). Watch the video and rate this fight!