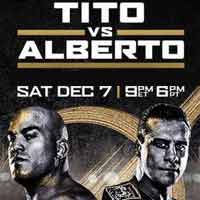 Review by AllTheBestFights.com: 2019-12-07, one sided fight between Tito Ortiz and Alberto Del Rio Rodriguez: it gets two stars.

The 44-year-old former Ufc light-Hw champ Tito Ortiz entered this fight with a pro mma record of 20-12-1 (70% finishing rate) and he is ranked as the No.40 light heavyweight in the world. He lost to Liam McGeary in 2015 (Liam McGeary vs Tito Ortiz) but since then he has beat Chael Sonnen (Tito Ortiz vs Chael Sonnen) and Chuck Liddell (Chuck Liddell vs Tito Ortiz 3).
His opponent, the first WWE Mexico-born world champion Alberto Del Rio Rodriguez, has a record of 9-5-0 (100% finishing rate) but he is not ranked as he hasn’t fought since February 27, 2010 when he was defeated by Mamoru Yamamoto, before this bout he had beat Arthur Bart. Tito vs Alberto El Patron is the main event of Combate Americas. Watch the video and rate this fight!