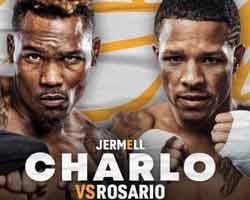 Review by AllTheBestFights.com: 2020-09-26, good fight between Jermell Charlo and Jeison Rosario: it gets three stars.
The Wbc light-Mw champion Jermell Charlo entered this fight with a pro boxing record of 33-1-0 (17 knockouts) and he is ranked as the No.1 super welterweight in the world. He lost to Tony Harrison in their first fight in 2018 (controversial decision, Jermell Charlo vs Tony Harrison I) but then he has beat Jorge Cota (Jermell Charlo vs Jorge Cota) and has took revenge on Harrison in their second bout (Tony Harrison vs Jermell Charlo 2).
His opponent, the Wba and Ibf super-Ww champ Jeison Rosario, has a record of 20-1-1 (14 knockouts) and he entered as the No.7 in the same weight class. He suffered his only loss when he faced Nathaniel Gallimore in 2017, since then he has collected one draw and eight victories beating Jorge Cota and Julian Williams in his last two (Julian Williams vs Jeison Rosario). Rosario vs Charlo is valid for the WBC, WBA and IBF World super-welterweight titles. Watch the video and rate this fight!