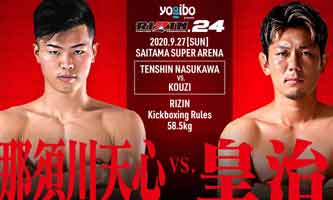 Review by AllTheBestFights.com: 2020-09-27, good fight between Tenshin Nasukawa and Kouzi: it gets three stars. Moreover this match was named ‘Kickboxing Fight of the Year 2020’ by our users (check out the full ranking here, 2020 Kickboxing Fans Ranking).
The undefeated black belt in karate and former ISKA world champion Tenshin Nasukawa entered this fight with a perfect kickboxing record of 37-0-0 (29 KOs=78%) and he is ranked as the No.1 super featherweight in the world. In his last three fights he has won over Shiro, Rui Ebata and Yuki Kasahara; at the end of 2018 he had also faced Floyd Mayweather Jr in a boxing exhibition fight (Floyd Mayweather Jr vs Tenshin Nasukawa).
His opponent, the former ISKA Lw world champ Kouzi (also known as Koji Tanaka), has an official record of 28-13-2 (10 knockouts) and he entered as the No.5 in the same weight class. He lost to Takeru at the end of 2018 (4-stars fight, Takeru vs Koji) but then he has beat Jan Szajko, Tatsuya Oiwa (4-stars fight, Kouzi vs Tatsuya Oiwa) and Seiya Kawahara. Kouzi vs Tenshin (那須川 天心 vs 皇治) is the main event of Rizin 24. Watch the video and rate this fight!