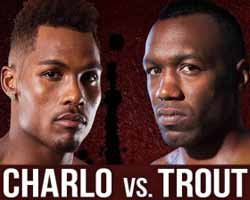 Review by AllTheBestFights.com: 2016-05-21, close fight but not so exciting: Jermall Charlo vs Austin Trout gets two stars.

The undefeated Ibf light-Mw champion Jermall Charlo entered this fight with a perfect record of 23-0-0 (18 KOs=78%) and he is ranked as the No.3 super welterweight in the world (currently the #1 in this division is Erislandy Lara). He fought three times in 2015 winning over Michael Finney, Cornelius Bundrage (=Bundrage vs Charlo) and Wilky Campfort (=Charlo vs Campfort).
His opponent, the former Wba light-Mw champion Austin Trout, has a boxing record of 30-2-0 (17 knockouts) and he entered as the No.10 in the same weight class. He suffered two consecutive losses in 2013, against Saul ‘Canelo’ Alvarez (=Canelo vs Trout) and Erislandy Lara (=Lara vs Trout), but then he has collected four victories beating Joey Hernandez in his last one (=Trout vs Hernandez). Charlo vs Trout is valid for the IBF World super welterweight title; undercard of Erislandy Lara vs Vanes Martirosyan 2. Watch the video and rate this fight!