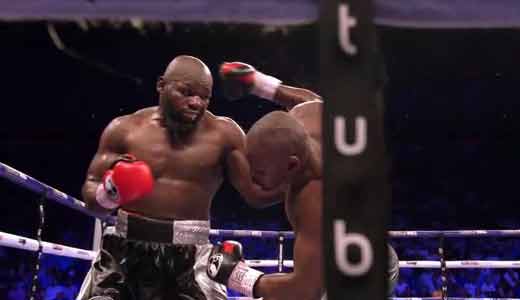 Review by AllTheBestFights.com: 2018-07-28, great performance and exciting fight with some tough exchanges from the first bell: Dereck Chisora vs Carlos Takam is one of the best boxing fights of 2018 and it gets four stars!

Dereck Chisora entered this fight with a pro boxing record of 28-8-0 (20 knockouts) and he is ranked as the No.21 heavyweight in the world. He lost to Agit Kabayel last year (Dereck Chisora vs Agit Kabayel) but he came back to win in 2018 with Zakaria Azzouzi.
His opponent, the former Olympian Carlos Takam, has a record of 35-4-1 (27 KOs=77%) and he entered as the No.17 in the same weight class. He fought three times last year beating Marcin Rekowski and Ivica Bacurin but then he lost to Anthony Joshua (Anthony Joshua vs Carlos Takam). Chisora vs Takam is valid for the vacant WBA International heavyweight title; undercard of Dillian Whyte vs Joseph Parker. Watch the video and rate this fight!