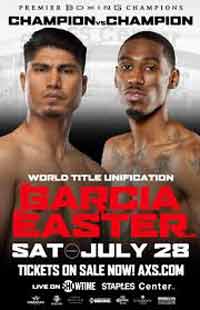 Review by AllTheBestFights.com: 2018-07-28, pretty good finish between Luis Ortiz and Razvan Cojanu but it is not enough to get three stars: it gets two.

e
The former interim Wba champion Luis Ortiz entered this fight with a professional record of 28-1-0 (24 KOs=86%) and he is ranked as the No.7 heavyweight in the world (currently the #1 in this division is Anthony Joshua) but he comes off his first loss, suffered against Deontay Wilder in March (Deontay Wilder vs Luis Ortiz); before this bout, in 2017, he had beat Daniel Martz (Luis Ortiz vs Daniel Martz).
His opponent, Razvan Cojanu, has a boxing record of 16-3-0 (9 knockouts) but he is not ranked as he hasn’t fought since May 6, 2017 when he was defeated by Joseph Parker (Joseph Parker vs Razvan Cojanu); before this fight, in 2016, he had won over Grover Young, Cristian Martinez and Zhiyu Wu. Ortiz vs Cojanu is on the undercard of Mikey Garcia vs Robert Easter Jr. Watch the video and rate this fight!

(Free embeddable video hosted on dailymotion and not uploaded by AllTheBestFights)