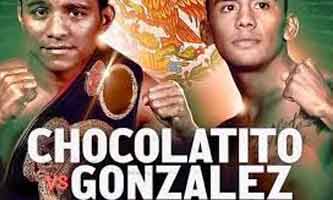 Review by AllTheBestFights.com: 2020-10-23, pretty good fight between Roman Gonzalez and Israel Gonzalez: it gets three stars.
The world champion in four different weight classes Roman Gonzalez entered this fight with a pro record of 49-2-0 (41 KOs=84%) and he is ranked as the No.2 super flyweight in the world (currently the #1 in this division is Juan Francisco Estrada). ‘Chocolatito’ Gonzalez lost two consecutive bouts in 2017, both against Srisaket Sor Rungvisai (controversial decision, boxing Fight of the Year candidate, Roman Gonzalez vs Srisaket Sor Rungvisai I and Srisaket Sor Rungvisai vs Roman Gonzalez II), but then he has won three bouts defeating Khalid Yafai in his last one (Khalid Yafai vs Roman Gonzalez).
His opponent, Israel Gonzalez, has an official boxing record of 25-3-0 (11 knockouts) and he entered as the No.17 in the same weight class. ‘Jiga’ Gonzalez lost to Khalid Yafai in 2018 (Khalid Yafai vs Israel Gonzalez) but then he has beat Jose Luis Zazueta and Sho Ishida. Chocolatito vs Gonzalez is valid for the WBA Super World super-flyweight title; undercard of Juan Francisco Estrada vs Carlos Cuadras 2. Watch the video and rate this fight!