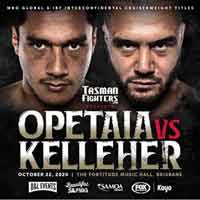 Review by AllTheBestFights.com: 2020-10-22, some good exchanges between Jai Opetaia and Benjamin Kelleher 2 but it is not enough to get three stars: it gets two.
The undefeated former Olympian Jai Opetaia entered this fight with a perfect boxing record of 19-0-0 (15 KOs=79%) and he is ranked as the No.17 cruiserweight in the world. In his last three fights he has won over Navosa Ioata, Nikolas Charalampous and Mark Flanagan.
His opponent, Benjamin Kelleher, has an official record of 13-1-2 (4 knockouts) and he entered as the No.67 in the same weight class. He suffered his only loss when he faced Opetaia in their first fight in 2018 (via tko but Benjamin also suffered hand injury), after this bout he has won six consecutive bouts defeating Patrick Ferguson and Quintin Carey in his last two. Opetaia vs Kelleher 2 is valid for the WBO Global and IBF Asia Oceania cruiserweight titles. Watch the video and rate this fight!

« Best fights of the week 42, year 2020
2020 BOXING fight – Roman Gonzalez vs Israel Gonzalez – full fight Video WBA »
HELP US!!! Since the CORONAVIRUS pandemic started, AllTheBestFights.com has struggled to survive! If you have enjoyed this website for the past 10 years, today we ask you for a little help: