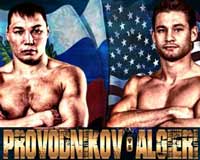 Review: 2014-06-14, pretty good fight between Ruslan Provodnikov and Chris Algieri: it gets three stars. Ruslan Provodnikov entered this fight with a professional boxing record of 23-2-0 (16 knockouts) and he is ranked as the No.3 light welterweight in the world (currently the #1 in this division is Danny Garcia). Provodnikov suffered his last loss in 2013 when he faced then-undefeated Timothy Bradley but it was a controversial decision (5-stars-fight Bradley vs Provodnikov), he came back to victory in his second bout of 2013 beating Mike Alvarado in a fight valid for the WBO light-Ww belt (4-stars-fight Alvarado vs Provodnikov).
His opponent, the undefeated Chris Algieri, has a perfect record of 19-0-0 (8 knockouts) and he entered as the No.46 welterweight, he has never fought as an amateur because he converted to pro boxing after retiring from kickboxing with a 20-0 record (former Wka and Iska champions). Provodnikov vs Algieri is valid for the WBO light welterweight title (Provodnikov’s first defense), first world title shot for Algieri. Watch the video and rate this fight!