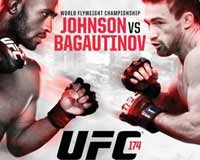 Review: 2014-06-14, disappointing fight between Demetrious Johnson and Ali Bagautinov: it gets two stars. Demetrious Johnson entered this fight with a professional mma record of 19-2-1 (58% finishing rate) and he is ranked as the No.1 flyweight in the world, he suffered his last defeats in 2011 when he faced Dominick Cruz for the Ufc Bw title (=Cruz vs Johnson) since then he moved down in weight class to the flyweight collecting one draw and five consecutive wins. He won the Ufc Flw title in 2012 against Joseph Benavidez (=Johnson vs Benavidez).
His opponent, the 2012 world combat sambo champion Ali Bagautinov, has an official record of 13-2-0 (69% finishing rate) and he entered as the No.8 in the same weight class, he suffered his two defeats in 2011 against Vitaliy Panteleev and Evgeniy Lazukov, since then he has won 11 consecutive fights. He debuted in the Ufc last year beating Marcos Vinicius Borges Pancini (=Bagautinov vs Vinicius), then he defeated Tim Elliott (=Elliott vs Bagautinov) and John Lineker (=Lineker vs Bagautinov). Johnson vs Bagautinov, main event of Ufc 174, is valid for the Ufc flyweight title. Watch the video and rate this fight!

(Alternative highlights video hosted on Youtube and not uploaded by AllTheBestFights, to report it please visit this link where the video is hosted)