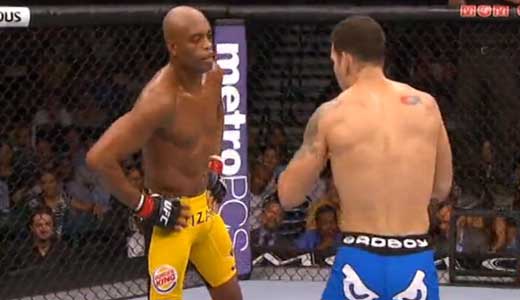 Review: 2013-07-06, the fight between Anderson ‘The Spider’ Silva and Chris Weidman was neither a war nor a particularly technical fight, but it was certainly a great show with a spectacular finish (UFC Knockout of the Night), and a bout like this one will go down in mma history: this is one of the most exciting mma fight of the year, four stars! Anderson Silva (33-4-0, 79% finishing rate) entered as the No.1 middleweight in the world while the undefeated Chris Weidman (9-0-0, 66% finishing rate) entered as the No.3. Silva vs Weidman, main event of UFC 162, is valid for the UFC middleweight title (Silva’s eleventh defense); they also faced each other a second time on December 28, 2013 (=Weidman vs Silva 2). Watch the video!

Their next fight: Chris Weidman vs Anderson Silva 2

Jon Jones’ and Urijah Faber’s reaction during the fight