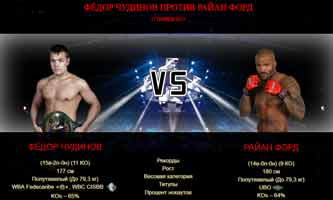 Review by AllTheBestFights.com: 2017-12-09, tough fight between Fedor Chudinov and Ryan Ford: it gets three stars.

The former Wba super-Mw champion Fedor Chudinov entered this fight with a pro record of 15-2-0 (11 knockouts) and he is ranked as the No.15 super middleweight in the world. He suffered two consecutive losses between 2016 and 2017, against Felix Sturm (via majority decision, Sturm vs Chudinov 2) and George Groves (=Groves vs Chudinov), but then he has beat Jonathan Geronimo Barbadillo.
His opponent, the mma fighter Ryan Ford, has a perfect boxing record of 14-0-0 (9 knockouts) and he entered as the No.36 light heavyweight. He has already fought five times in 2017 defeating Robert Berridge, Joaquin Murrieta and Miguel Cubos in his last three. Chudinov vs Ford is valid for the vacant WBA International super middleweight title. Watch the video and rate this fight!