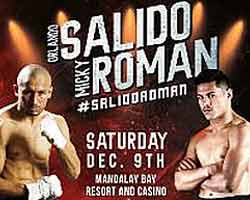 Review by AllTheBestFights.com: 2017-12-09, nice and tough fight between Orlando Salido and Miguel Roman: it gets three stars.

The former world champion in two different weight classes Orlando Salido entered this fight with a record of 44-13-4 (31 knockouts) and he is ranked as the No.6 super featherweight in the world (currently the #1 in this division is Vasyl Lomachenko but Salido managed to beat him in 2014 via split decision, Salido vs Lomachenko) but he won just one out of his last four bouts, with Aristides Perez in 2017 (=Salido vs Perez). Before this fight ‘Siri’ Salido drew with Francisco Vargas in 2016 (Fight of the Year candidate, Vargas vs Salido) while, in 2015, he faced twice Roman Martinez losing the first bout and drawing the second one (=Salido vs Martinez I and Martinez vs Salido II).
His opponent, Miguel Roman, has an official boxing record of 57-12-0 (44 KOs=77%) and he entered as the No.11 in the same weight class. Mickey Roman has fought twice in 2017 losing to Takashi Miura (=Roman vs Miura) and beating Nery Saguilan (=Roman vs Saguilan). Roman vs Salido is the main event of the evening. Watch the video and rate this fight!