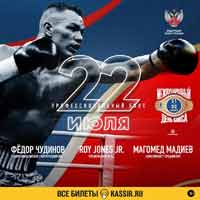 Review by AllTheBestFights.com: 2019-07-22, some good exchanges between Fedor Chudinov and Ezequiel Osvaldo Maderna but it is not enough to get three stars: it gets two.

The former Wba super-Mw champion Fedor Chudinov entered this fight with a professional boxing record of 20-2-0 (14 knockouts) and he is ranked as the No.9 super middleweight in the world (currently the #1 in this division is Callum Smith). He suffered two consecutive losses between 2016 and 2017, against Felix Sturm (via majority decision, Sturm vs Chudinov 2) and George Groves (Groves vs Chudinov), but then he has won six fights defeating Wuzhati Nuerlang (Fedor Chudinov vs Wuzhati Nuerlang) and Rafael Bejaran in 2019 (Fedor Chudinov vs Rafael Bejaran).
His opponent, the former Olympian Ezequiel Osvaldo Maderna, has an official record of 26-5-0 (16 knockouts) and he entered as the No.37 in the same weight class. He fought twice last year beating Martin Fidel Rios and losing to Jose Uzcategui (Jose Uzcategui vs Ezequiel Osvaldo Maderna). Chudinov vs Maderna is valid for the WBA Continental super middleweight title. Watch the video and rate this fight!