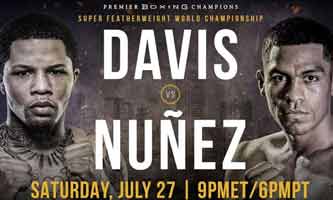 Review by AllTheBestFights.com: 2019-07-27, good fight between Gervonta Davis and Ricardo Nunez: it gets three stars.

The undefeated former Ibf and current Wba super-Fw champion Gervonta Davis entered this fight with a perfect boxing record of 21-0-0 (20 KOs=95%) and he is ranked as the No.2 super featherweight in the world (currently the #1 in this division is Miguel Berchelt). In his last three bouts he has won over Francisco Fonseca (Gervonta Davis vs Francisco Fonseca), Jesus Marcelo Andres Cuellar (Gervonta Davis vs Jesus Cuellar) and Hugo Ruiz (Gervonta Davis vs Hugo Ruiz).
His opponent, Ricardo Nunez, has an official record of 21-2-0 (19 KOs=90%) and he entered as the No.32 in the same weight class. He lost to Barnie Arguelles in 2015 but since then he has won 10 consecutive bouts defeating Eduardo Pacheco in 2019. Davis vs Nunez is valid for the WBA Super World super featherweight title (Davis’ second defense). Watch the video and rate this fight!