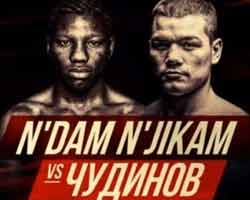 Review by AllTheBestFights.com: 2019-12-13, some good exchanges between Fedor Chudinov and Hassan N’Dam N’Jikam but it is not enough to get three stars: it gets two.

The former Wba super-Mw champion Fedor Chudinov entered this fight with a professional boxing record of 21-2-0 (15 knockouts) and he is ranked as the No.5 super middleweight in the world (currently the #1 in this division is Callum Smith). He suffered two consecutive losses between 2016 and 2017, against Felix Sturm (via majority decision, Sturm vs Chudinov 2) and George Groves (Groves vs Chudinov), but then he has won seven fights defeating Ezequiel Osvaldo Maderna in his last one (Fedor Chudinov vs Ezequiel Osvaldo Maderna).
His opponent, the former Olympian and former Wbo, Wba Mw champ Hassan N’Dam N’Jikam, has an official record of 37-4-0 (21 knockouts) and he entered as the No.10 in the same weight class but he lost two out of his last three bouts: the rematch with Ryota Murata in 2017 (Hassan N’Dam N’Jikam vs Ryota Murata II) and with Callum Smith in 2019 (Callum Smith vs Hassan N’Dam N’Jikam); between these two fights he beat Martin Murray (Martin Murray vs Hassan N’Dam N’Jikam). Chudinov vs N’Dam N’Jikam is the main event of the evening. Watch the video and rate this fight!