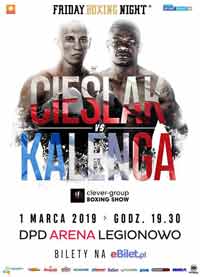 Review by AllTheBestFights.com: 2019-03-01, some good exchanges between Michal Cieslak and Youri Kayembre Kalenga but it is not enough to get three stars: it gets two.

The undefeated Michal Cieslak entered this fight with a perfect record of 17-0-0 (11 knockouts) and he is ranked as the No.24 cruiserweight in the world. In his last three bouts he has won over Ivica Bacurin, Serhiy Radchenko and Dusan Krstin.
His opponent, Youri Kayembre Kalenga, has an official boxing record of 24-5-0 (17 knockouts) and he entered as the No.54 in the same weight class but he lost two out of his last three fights, against Kevin Lerena in 2017 (Kevin Lerena vs Youri Kayembre Kalenga) and Mateusz Masternak in 2018 (Mateusz Masternak vs Youri Kayembre Kalenga 2); after these bouts he has beat Soso Abuladze. Cieslak vs Kalenga is the main event of the evening. Watch the video and rate this fight!