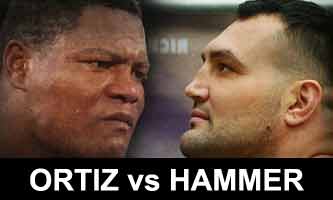 Review by AllTheBestFights.com: 2019-03-02, pretty good fight between Luis Ortiz and Christian Hammer: it gets three stars.

The former interim Wba champion Luis Ortiz entered this fight with a pro record of 30-1-0 (26 KOs=87%) and he is ranked as the No.8 heavyweight in the world (currently the #1 in this division is Anthony Joshua). He fought three times last year losing to Deontay Wilder (Deontay Wilder vs Luis Ortiz) but then he has defeated Razvan Cojanu (Luis Ortiz vs Razvan Cojanu) and Travis Kauffman (Luis Ortiz vs Travis Kauffman).
His opponent, Christian Hammer, has an official boxing record of 24-5-0 (14 knockouts) and he entered as the No.14 in the same weight class. He lost to Alexander Povetkin in 2017 (Alexander Povetkin vs Christian Hammer) but he came back to win in 2018 winning over Tornike Puritchamiashvili and Michael Wallisch. Ortiz vs Hammer is on the undercard of Erislandy Lara vs Brian Carlos Castano. Watch the video and rate this fight!