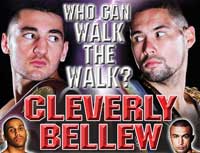 Review: 2011-10-15, good fight between Nathan Cleverly and Tony Bellew: three stars. Cleverly beat Bellew by majority decision inflicting the first defeat to “Bomber” Bellew (both were undefeated). Nathan Cleverly (22-0-0) entered as the No.5 light heavyweight in the world while Tony Bellew (16-0-0) entered as the No.14. Cleverly vs Bellew was valid for the WBO light heavyweight title; they also faced each other a second time on November 22, 2014 (=Cleverly vs Bellew 2). Watch the video!