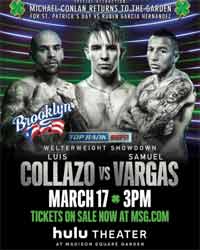 Review by AllTheBestFights.com: 2019-03-17, some good exchanges between Luis Collazo and Samuel Vargas but it is not enough to get three stars: it gets two.

The former Wba Ww champion Luis Collazo entered this fight with a pro record of 38-7-0 (20 knockouts) and he is ranked as the No.59 welterweight in the world. He lost to Keith Thurman in 2015 (Thurman vs Collazo) but then he has beat Sammy Vasquez (Sammy Vasquez vs Luis Collazo) and Bryant Perrella.
His opponent, Samuel Vargas, has an official boxing record of 30-4-2 (14 knockouts) and he entered as the No.38 in the same weight class. He fought three times last year drawing with Mauro Maximiliano Godoy, losing to Amir Khan (Amir Khan vs Samuel Vargas) and beating Gabriel Adrian Pereiro. Collazo vs Vargas is the main event of the evening. Watch the video and rate this fight!