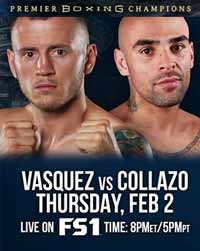 Review by AllTheBestFights.com: 2017-02-02, great fight between Sammy Vasquez and Luis Collazo: it gets three stars.

Sammy Vasquez entered this fight with a professional boxing record of 21-1-0 (15 knockouts) and he is ranked as the No.21 welterweight in the world but he comes off his first loss, suffered against Felix Diaz last year (=Vasquez vs Diaz). Before this bout he had beat Aaron Martinez (=Vasquez vs Martinez).
His opponent, the former Wba Ww champion Luis Collazo, has an official record of 36-7-0 (19 knockouts) but he is not ranked as he hasn’t fought since July 11, 2015 when he was defeated by Keith Thurman (=Thurman vs Collazo). Sammy Vasquez vs Luis Collazo is the main event of the evening. Watch the video and rate this fight!