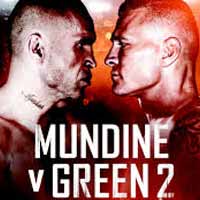 Review by AllTheBestFights.com: 2017-02-03, close fight but not so exciting: Danny Green vs Anthony Mundine 2 gets two stars.

The former world champion in two different weight classes Anthony Mundine entered this fight with a pro boxing record of 47-7-0 (27 knockouts) but he is not ranked as he hasn’t fought since November 11, 2015 when he was defeated by Charles Hatley (=Mundine vs Hatley).
His opponent, the 43-year-old (two years older than Mundine) and former world champion in three different weight divisions Danny Green, has a record of 35-5-0 (28 KOs=80%) and he entered as the No.12 cruiserweight in the world. He suffered his last loss when he faced Krzysztof Wlodarczyk in 2011 (=Wlodarczyk vs Green), since then he has won four fights beating Kane Watts in 2016. In their first bout Anthony Mundine defeated Danny Green via unanimous decision (May 17, 2006); this second fight is valid for the Australian cruiserweight title. Watch the video and rate this fight!