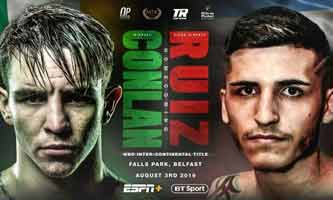 Review by AllTheBestFights.com: 2019-08-03, some good single shots between Michael Conlan and Diego Ruiz but it is not enough to get three stars: it gets two.

The undefeated former Olympian Michael Conlan entered this fight with a perfect boxing record of 11-0-0 (6 knockouts) and he is ranked as the No.67 featherweight in the world. In his last three fights he has won over Nicola Cipolletta, Jason Cunningham (Michael Conlan vs Jason Cunningham) and Ruben Garcia Hernandez (Michael Conlan vs Ruben Garcia Hernandez).
His opponent, Diego Alberto Ruiz, has an official record of 21-2-0 (10 knockouts) and he entered as the No.55 in the same weight class. He lost to Leonardo Bruno Cicopiedi in 2016 but since then he has won ten consecutive bouts defeating Luis Emanuel Cusolito in 2019. Conlan vs Ruiz is valid for the WBO Inter-Continental and vacant WBA Inter-Continental featherweight titles. Watch the video and rate this fight!