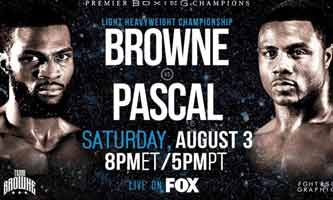 Review by AllTheBestFights.com: 2019-08-03, some good exchanges between Marcus Browne and Jean Pascal but it is not enough to get three stars: it gets two.

The undefeated former Olympian and current interim Wba light-Hw champion Marcus Browne, entered this fight with a perfect record of 23-0-0 (16 knockouts) and he is ranked as the No.5 light heavyweight in the world (currently the #1 in this division is Sergey Kovalev). In his last three bouts he has won over Francy Ntetu (Marcus Browne vs Francy Ntetu), Lenin Castillo (Marcus Browne vs Lenin Castillo) and Badou Jack (Badou Jack vs Marcus Browne).
His opponent, the former Olympian and former Wbc, Ibo light-Hw champ Jean Pascal, has a boxing record of 33-6-1 (20 knockouts) and he entered as the No.10 in the same weight class. He fought twice last year beating Steve Bosse (Jean Pascal vs Steve Bosse) and losing to Dmitry Bivol (Dmitry Bivol vs Jean Pascal). Browne vs Pascal is valid for the interim WBA World and WBC Silver light heavyweight titles; undercard of Adam Kownacki vs Chris Arreola. Watch the video and rate this fight!