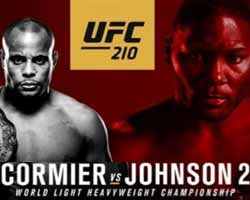 Review by AllTheBestFights.com: 2017-04-08, disappointing fight between Daniel Cormier and Anthony Johnson 2: it gets two stars.

The former Strikeforce Hw and current Ufc light-Hw champion Daniel Cormier entered this fight with a professional mma record of 18-1-0 (61% finishing rate) and he is ranked as the No.2 light heavyweight in the world. ‘DC’ suffered his only loss against #1 Jon Jones in 2015 (=Jones vs Cormier), after this bout he won the vacant Ufc belt with Anthony Johnson in their first fight (=Johnson vs Cormier), he defended it once against Alexander Gustafsson (via split decision, Cormier vs Gustafsson) and he beat Anderson Silva (=Cormier vs Silva).
His opponent, Anthony Johnson, has an official record of 22-5-0 (73% ko/tko victory rate – he has never won via submission) and he entered as the No.3 in the same weight class. After losing to Cormier in their first fight ‘Rumble’ Johnson has won over Jimi Manuwa (=Johnson vs Manuwa), Ryan Bader (=Johnson vs Bader) and Glover Teixeira (=Johnson vs Teixeira). Daniel Cormier vs Anthony Johnson 2, main event of UFC 210, is valid for the Ufc light heavyweight title (Cormier’s second defense). Watch the video and rate this fight!