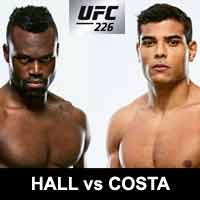 Review by AllTheBestFights.com: 2018-07-07, nice and tough exchanges between Uriah Hall and Paulo Henrique Costa: it gets three stars (UFC Performance of the Night).

The black belt in karate Uriah Hall entered this fight with a pro mma record of 13-8-0 (85% finishing rate) and he is ranked as the No.13 middleweight in the world. He suffered three consecutive defeats between 2015 and 2016, against Robert Whittaker (Hall vs Whittaker), Derek Brunson (Hall vs Brunson) and Gegard Mousasi (Mousasi vs Hall 2) but he came back to win in 2017 with Krzysztof Jotko (Krzysztof Jotko vs Uriah Hall).
His opponent, the undefeated Paulo Henrique Borrachinha Costa, has a perfect record of 11-0-0 (100% finishing rate) and he entered as the No.16 in the same weight class. Paulo Costa fought three times last year winning over Garreth McLellan, Oluwale Bamgbose (Paulo Costa vs Bamgbose) and Johny Hendricks (Johny Hendricks vs Paulo Costa). Hall vs Costa is on the undercard of Stipe Miocic vs Daniel Cormier – UFC 226. Watch the video and rate this fight!

(Free embeddable video hosted on Youtube and not uploaded by AllTheBestFights)
https://www.youtube.com/watch?v=EQ9M1VpcgYU