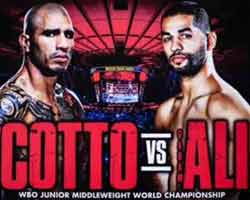 Review by AllTheBestFights.com: 2017-12-02, good fight between Miguel Cotto and Sadam Ali: it gets three stars.

The world champion in four different weight classes Miguel Angel Cotto entered this fight with record of 41-5-0 (33 KOs=80%) and he is ranked as the No.3 super welterweight in the world (currently the #1 in this division is Erislandy Lara). He was defeated by Saul Canelo Alvarez in 2015 (=Cotto vs Canelo) but he came back to win in 2017 with Yoshihiro Kamegai (=Cotto vs Kamegai).
His opponent, Sadam Ali, has a boxing record of 25-1-0 (14 knockouts) and he entered as the No.25 welterweight. He suffered his only loss when he faced Jessie Vargas last year (=Vargas vs Ali) but then he has fought three times winning over Saul Corral, Jorge Silva and Johan Perez. Cotto vs Ali is valid for the WBO World super welterweight title (Cotto’s retirement fight and first title defense). Watch the video and rate this fight!