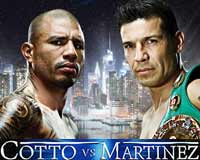 Review: 2014-06-07, great fight between Sergio Martinez and Miguel Cotto: it gets three stars. The 39-year-old Sergio Gabriel Martinez (six years older than Cotto) entered this fight with a professional boxing record of 51-2-2 (28 knockouts), he is not ranked as he hasn’t fought since April 27, 2013 when he defeated Martin Murray (=Martinez vs Murray) but he was the No.1 middleweight in the world. ‘Maravilla’ Martinez suffered his last defeat (by majority decision) in 2009 when he faced Paul Williams for the first time, but he took revenge on the American in their secon bout (The Ring magazine Knockout of the Year 2010: Martinez vs Williams 2); the Argentinian comes off seven consecutive wins.
His opponent, Miguel Angel Cotto, has an official record of 38-4-0 (31 KOs=81%) and he entered as the No.4 light middleweight, he has won world titles in three different weight classes and in this fight he moved up to the Mw division. Cotto suffered two consecutive defeats in 2012, against Floyd Mayweather Jr (=Mayweather vs Cotto) and Austin Trout (=Cotto vs Trout) but he came back to victory in 2013 beating Delvin Rodriguez (=Cotto vs Rodriguez). ‘Maravilla’ Martinez vs Cotto is valid for the WBC middleweight title (first fight and world title shot for Cotto in the Mw division). Watch the video and rate this fight!