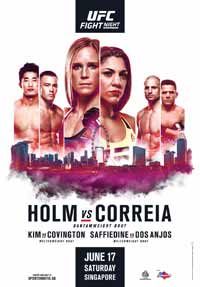 Review by AllTheBestFights.com: 2017-06-17, disappointing fight between Dong Hyun Kim and Colby Covington: it gets two stars.

The black belt in judo Dong Hyun Kim entered this fight with a professional record of 22-3-1 (50% finishing rate) and he is ranked as the No.19 welterweight in the world. He lost to current #1 Ufc Ww champion Tyron Woodley in 2014 (=Woodley vs Kim), but then he has beat Josh Burkman, Dominic Waters (=Kim vs Waters) and Tarec Saffiedine (=Kim vs Saffiedine).
His opponent, Colby Covington, has a mma record of 11-1-0 (64% finishing rate) and he entered as the No.25 in the same weight class. He suffered his only loss when he faced Warlley Alves in 2015, since then he has won over Jonathan Meunier, Max Griffin and Bryan Barberena. Colby Covington vs Dong Hyun Kim is on the undercard of Holly Holm vs Bethe Correia – UFC Fight Night 111. Watch the video and rate this fight!