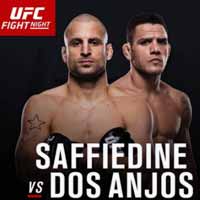 Review by AllTheBestFights.com: 2017-06-17, good fight between Rafael dos Anjos and Tarec Saffiedine: it gets three stars.

The black belt in Brazilian jiu-jitsu and former Ufc Lw champion Rafael dos Anjos entered this fight with a pro record of 25-9-0 (52% finishing rate) and he is ranked as the No.4 lightweight in the world but he comes off two consecutive defeats: against Eddie Alvarez (=dos Anjos vs Alvarez) and Tony Ferguson (=dos Anjos vs Ferguson).
His opponent, the black belt in Bjj, karate and former Strikeforce Ww champion Tarec Saffiedine, has an official mma record of 16-6-0 (37% finishing rate) and he entered as the No.27 welterweight but he lost three out of his last four bouts, the last two with Rick Story (=Saffiedine vs Story) and Dong Hyun Kim (=Kim vs Saffiedine). Rafael dos Anjos vs Tarec Saffiedine is on the undercard of Holly Holm vs Bethe Correia – UFC Fight Night 111. Watch the video and rate this fight!