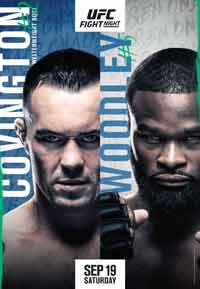 Review by AllTheBestFights.com: 2020-09-19, nice and tough exchanges between Donald Cerrone and Niko Price: it gets three stars.
The black belt in Brazilian jiu-jitsu and gaidojutsu Donald Cerrone entered this fight with a pro mma record of 36-15-0 (75% finishing rate) and he is ranked as the No.24 welterweight in the world but he comes off four consecutive losses, the last two against Conor McGregor (Conor McGregor vs Donald Cerrone) and Anthony Pettis (Anthony Pettis vs Donald Cerrone 2); Cowboy’s last victory was with Al Iaquinta in May 2019 (Al Iaquinta vs Donald Cerrone).
His opponent, Niko Price, has a record of 14-4-0 (93% finishing rate) and he entered as the No.52 in the same weight class but he lost two out of his last three fights, against Geoff Neal in 2019 (Niko Price vs Geoff Neal) and Vicente Luque in 2020; between these two bouts he beat James Vick. Price vs Cowboy Cerrone is on the undercard of Colby Covington vs Tyron Woodley – UFC Fight Night 178 (also known as UFC Vegas 11). Watch the video and rate this fight!