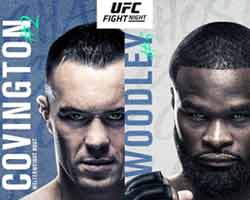 Review by AllTheBestFights.com: 2020-09-19, fight not so exciting between Colby Covington and Tyron Woodley: it gets two stars.
The former interim Ufc Ww and 2013 FILA 77 kg No-Gi grappling world champion Colby Covington entered this fight with a professional mma record of 15-2-0 (47% finishing rate) and he is ranked as the No.4 welterweight in the world but he comes off the loss against current #1 Ww Kamaru Usman (Kamaru Usman vs Colby Covington); before this bout, between 2018 and 2019, he had beat Rafael dos Anjos (Rafael dos Anjos vs Colby Covington) and Robbie Lawler (Colby Covington vs Robbie Lawler).
His opponent, the black belt in Bjj and former Ufc Ww champ Tyron Woodley, has an official record of 19-5-1 (63% finishing rate) and he entered as the No.5 in the same weight class but he comes off two consecutive losses: against Usman in 2019 (Tyron Woodley vs Kamaru Usman) and Gilbert Burns in 2020 (Tyron Woodley vs Gilbert Burns); before these two fights, in 2018, he had defeated Darren Till (Tyron Woodley vs Darren Till). Woodley vs Covington is the main event of the UFC Fight Night 178 (also known as UFC Vegas 11). Watch the video and rate this fight!