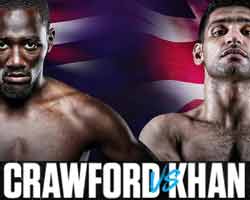 Review by AllTheBestFights.com: 2019-04-20, disappointing fight between Terence Crawford and Amir Khan: it gets two stars.

The undefeated world champion in three different weight classes Terence Crawford entered this fight with a perfect record of 34-0-0 (25 knockouts) and he is ranked as the No.1 welterweight in the world. In his last three bouts he has beat Julius Indongo (Terence Crawford vs Julius Indongo), Jeff Horn (Jeff Horn vs Terence Crawford) and Jose Benavidez (Terence Crawford vs Jose Benavidez).
His opponent, the former Olympian and former world champion Amir Khan, has an official boxing record of 33-4-0 (20 knockouts) and he entered as the No.10 in the same weight class. He was defeated by Saul Canelo Alvarez in 2016 (4-stars fight, Saul Canelo Alvarez vs Amir Khan) but he came back to win in 2018 beating Phil lo Greco (Amir Khan vs Phil Lo Greco) and Samuel Vargas (Amir Khan vs Samuel Vargas). Crawford vs Khan is valid for the WBO World welterweight title (Crawford’s second defense). Watch the video and rate this fight!