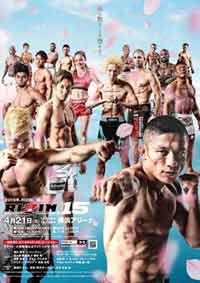 The former Strikeforce light-Hw champion Muhammed King Mo Lawal entered this fight with a professional mma record of 21-8-0 (62% ko/tko victory rate – he has never won via submission) and he is ranked as the No.30 light heavyweight in the world but he won just one out of his last four bouts, against Quinton Rampage Jackson in 2017 (Quinton Rampage Jackson vs Muhammed King Mo Lawal 2); after this fight he has lost to Ryan Bader (Ryan Bader vs Muhammed King Mo Lawal) and Liam McGeary (Muhammed King Mo Lawal vs Liam McGeary).
His opponent, Jiri Prochazka, has an official record of 23-3-1 (96% finishing rate) and he entered as the No.25 in the same weight class. He suffered his last loss when he faced Lawal the first time (December 21, 2015 Muhammed ‘King Mo’ Lawal vs Jiri Prochazka); since then he has won seven consecutive bouts defeating Brandon Halsey in his last one. King Mo vs Prochazka 2, main event of Rizin 15, is valid for the inaugural Rizin light heavyweight title. Watch the video and rate this fight!