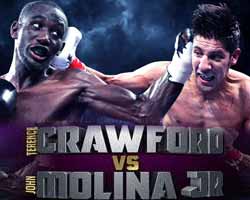 The undefeated Wbc and Wbo light-Ww champion Terence Crawford entered this fight with a perfect boxing record of 29-0-0 (20 knockouts) and he is ranked as the No.1 super lightweight in the world. He has fought twice in 2016 beating Henry Lundy (=Crawford vs Lundy) and Viktor Postol (=Crawford vs Postol).
His opponent, John Molina Jr, has a record of 29-6-0 (23 KOs=79%) and he entered as the No.8 in the same weight class. He suffered three consecutive losses between 2014 and 2015, the last one against Adrien Broner (=Broner vs Molina Jr), but then he has won over Jorge Romero and Ruslan Provodnikov (=Provodnikov vs Molina). Crawford vs Molina is valid for the WBC and WBO World super lightweight titles. Watch the video and rate this fight!